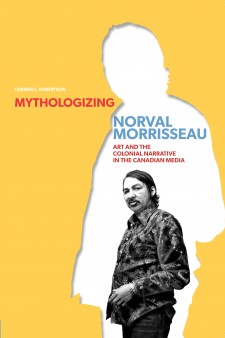 Art and the Colonial Narrative in the Canadian Media

Mythologizing Norval Morrisseau examines the complex identities assigned to Anishinaabe artist Norval Morrisseau. Was he an uneducated artist plagued by alcoholism and homelessness? Was Morrisseau a shaman artist who tapped a deep spiritual force? Or was he simply one of Canada’s most significant artists? Carmen L. Robertson charts both the colonial attitudes and the stereotypes directed at Morrisseau and other Indigenous artists in Canada’s national press. Robertson also examines Morrisseau’s own shaping of his image.

An internationally known and award-winning artist from a remote area of northwestern Ontario, Morrisseau founded an art movement known as Woodland Art developed largely from Indigenous and personal creative elements. Still, until his retrospective exhibition at the National Gallery of Canada in 2006, many Canadians knew almost nothing about Morrisseau’s work.

Using discourse analysis methods, Robertson looks at news stories, magazine articles, and film footage, ranging from Morrisseau’s first solo exhibition at Toronto’s Pollock Gallery in 1962 until his death in 2007 to examine the cultural assumptions that have framed Morrisseau.

Carmen L. Robertson is a Lakota/Scottish professor of art history at University of Regina. She also maintains an active curatorial practice. Robertson is the co-author of Seeing Red: A History of Natives in Canadian Newspapers, which won three Saskatchewan Book Awards in 2011.